Challenges to Oral History after the “Digital Revolution”

What have been the repercussions of the increasingly digitised world that we live in on oral history? Well, the repercussions have doubtlessly been felt by all operating in the field of oral history, whether good or bad, or more likely, a complex concoction of the two. This has been fuelled by our inherently complicated relationship with technology. The world we live in is, on the one hand, mesmerised by technology, and observes changes as undeniable progress, but, on the other, it fears the future and the exponentially increasing power of technology over our lives. My essay will address the new challenges incurred by oral historians as a result of the so called “Digital Revolution”.

Gone are the days when oral history was conducted and then placed in the archive, unheard, 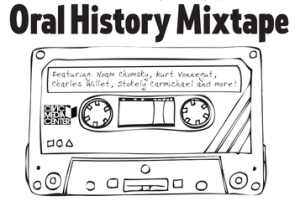 for eternity. Though of course many are left unheard, we now have the technology to make oral history records available to the masses, but is this necessarily something we should be striving for? There are ethical, logistical and academic concerns to consider first. Accessibility will be the focal concern of my essay, namely, what issues arise from making oral history available online?

Oral history has increasingly come under the jurisdiction of public historians, we see it being used by television makers, museum curators, and even, theatre producers. It has been used by Heritage Lottery Funded (HLF) projects to engage with communities and promote social cohesion. This propagates the understanding that anyone can do oral history. Indeed, there is nothing to stop anyone, whoever they may be, from conducting their own oral history project, posting it online, and allowing the public to pass comment. This has been heralded by some as a democratisation of the past, but is this an accurate interpretation?

My question is this, does digital oral history mean bad oral history? Does opening up, or indeed, conducting oral history specifically for a digital audience automatically make it less academic, less credible, less worthy? Or has the use of technology, and the opening up of oral history records ‘put the oral back into oral history’?

I have asked a lot of questions because digital oral history is a diverse area. I have chosen to look at accessibility because I feel this is the strand which has had the most significant impact on the way oral history is conducted and interpreted. I argue that whilst increasing accessibility can be a wonderful thing which promotes the utilisation of oral history, we should not open the field entirely to public scrutiny without addressing the serious ramifications.

Though out of sync with blog posts from my course mates on this topic, my hopes and concerns are nonetheless sizeable. Conducting an oral history interview for posterity is, after all, a daunting and exciting prospect. My area of interest, the influence of gender roles on activities undertaken by girl guiding groups in the mid-twentieth century, is virtually untrodden by historians. This both concerns me, as I have little specific research to go on, and motivates me, to really uncover a previously untold story.

Despite the fact that I have known who I am going to interview since early February, I am nervous for a number of reasons. I am concerned about creating a rapport with my interviewee, because whilst this isn’t usually a problem, I recently interviewed someone with whom I was unable to establish rapport with, this resulted in a bored sounded interviewee, although perhaps that is his natural demeanour. The interviews I conducted for my radio documentary have no doubt been helpful preparation for this one, but on those occasions I knew precisely what content I could hope to obtain, having read the interviewees’ work. In this instance I am stepping into the unknown. For this reason I am concerned that my line of questioning will not do the interviewee justice, and will not contribute to the historical record as much as it should.

I am worried about navigating myself, and the interviewee, through the interview so that we both leave feeling satisfied, and indeed happy about the experience. In this vein, I am concerned that I will assume too much knowledge, and forget to ask the interviewee about how they felt in a certain situation. Furthermore, my primary concern is forgetting to ask follow up questions, or asking leading questions, as I have a tendency to do in my normal life.

I wish to be as prepared as possible so I will ensure I have an extensive interview plan, whether

or not I feel I need to actively use it in the interview. And something that could be considered a hope and a concern is my desire to stay engaged throughout, when I have conducted interviews over the years there have been times when my thoughts have wandered, occasionally to calamitous effect, and these, were much shorter interviews. So, I am concerned that I will daydream, and I hope that I will not.

I hope to give back to the girl guiding community from what I uncover. I am also hoping that it will enrich my own experience of guiding today. I trust that I will gain insight into the experience of leading youth groups in the mid-twentieth century, and how gender roles are perceived to have been influential in activities at the time. Lastly, I want to learn more about the way memory works, and reflect on the challenges of conducting and using oral history.

Coming to a foreign country one of the first thing I notice are their sporting passions. Sports have been a major part of my past growing up with multiple professional teams in my home town as well as attending a major football college power. I have seen how sports can divide or unite communities when against certain opponents. I have seen how major American television will cover anything and everything regarding sports and thus the impact they have over the nation. As a result of this it only makes sense to me that when I enter a new country I look to pick up on these same trends and to look further into them.

One of the things I have noticed in the U.K. is that, similarly to the U.S., football is not just a game but rather can be a way of life. Teams will unite and divide communities. People love to watch their rivals fail almost as much as watching their own team succeed. This is particularly evident on this weekend, in the matchup between Celtic FC and Rangers FC in Glasgow. Football fans are split whether Rangers FC is the same club with the same history that was sent to the lowest level of the Scottish Premier League in 2012 and currently owned by a new company. This is just one instance of a the rivalry among the aggressive history between the clubs. The passion given to these, and other, teams seems unrivaled around the world. One goal while in the U.K. is to further understand this passion.

It has been suggested that I explore another side of U.K. football, women’s football. I have seen images and short articles regarding this portion of the game but never explored its history. This side of the game has since peaked my interest and is something I hope to further understand.

Through exploring the women’s side of football I hope to bring these women to the foreground in the public image. Many fans of the game, such as myself, may not know much about them or their impact in the football world. Through an Oral History interview with someone who has experienced this side of football, I wish to bring their experiences into the public conscious.