Women in Science: Preparing for Interviews

As a Royal Holloway and Bedford New College alumni and someone who has also worked for the College after graduating from an undergraduate programme, I was very excited at the prospect of connecting with alumni from an earlier generation. The history of the College is of immense personal interest so to be able to contribute something to the College’s archives feels like a real honour. As such, I’m very keen to do it well.

I was initially provided with a copy of my interviewee’s application to study at university, as well as her academic transcript. I was interested to see that Bedford College was her third choice of university, whilst Oxford and Cambridge women’s colleges proceeded it, but she was not offered a place at either. This immediately brought questions to my mind: did my interviewee feel happy with her place at Bedford College? Has she felt the effects of missing out on those top institutions in her career? Why did she choose women-only institutions?

I contacted my interviewee by email initially and asked whether she was still happy to participate in the project. I didn’t want to intrude with a phone-call so early on, in case it made her feel obliged to talk to me. But luckily she answered my email right away and asked me to give her a call that evening. I live about an hour away from her, and she advised me to take the train rather than drive as the traffic is a nightmare on the way over. She then offered to pick me up from the station as it is a hilly walk up to her house. We spent about twenty minutes on the phone and she asked me a few questions about myself and my time at Royal Holloway. Although the project isn’t about me and oral history interviews aren’t a two way process in that respect, I did give her a bit of information about my studies and career so far. I think this helped to reassure her actually and I really wanted to do that considering she was inviting me, a stranger, into her home to talk to her about her life.

I had a few days between our telephone conversation and actual meeting to be able to prepare questions. I was really excited to meet my interviewee and frequently found my mind wandering to questions I could ask, so the planning stage was very easy! I kept a notebook in my bag so I could jot my thoughts down as they came to me. I was nervous about the recorder though and it was harder to plan around that. When using a recording devise for another of my MA projects, I found it just stopped recording one of my interviews mid-way through and I couldn’t discover why. I was nervous of this happening again, since I am using the exact same device. I kept checking it every day to make sure it was able to record anything – an attempt to reassure myself that I wouldn’t suffer a technology-induced embarrassment in front of my interviewee, a woman whose career, and indeed life, was at the forefront of technological advances.

The day of the interview came around and I caught the train, feeling nervous and also excited to meet this amazing woman. I read through my questions on the train (and checked the recording device one last time!). We met at the station and conversation flowed between us naturally. My interviewee is certainly an interesting woman.

The difficulty was, however, that she didn’t like talking when the recorder was on. Her answers were quite short and I was conscious of hoping my questions didn’t sound too leading. She also tended to look to me for reassurance when making answers, in case it wasn’t the information I was looking for. Whilst she was very honest with her answers and I don’t feel I influenced their content, I think she was trying to please me with the style of response. I thought I had plenty of questions, but I found they only just took up 45 minutes – the shortest time my interview should be. Once the recorder was off, my interviewee made me a coffee and then she really started to open up. Once the invasive recorder was back in my bag, she told me some really fascinating stories about her family life and I could see how this must have shaped her academic life. It was like speaking with a different person. I should have pulled the recorder back out, but I didn’t want to put her off again. Instead, I made a mental note of the stories and I plan to ask her about them in my second interview.

This has helped me to plan questions for this next interview, and I have listened back over my recording to provide further inspiration for the second interview. She spoke a lot about her experience of sports clubs in College life and I’d like to know more about that social aspect of studying at university in the 1950s, as well as how her family’s background influenced her interest in science. The main difficulty is trying to find a time we are both free. I work full-time, whilst my interviewee has a very active life but I am really hoping to meet her again soon.

This has been a fantastic project to be a part of and it’s been of personal and academic benefit to meet a woman who has led such an interesting life, especially someone who is a fellow alumnus.

How was Bedford College changed with the admittance of male students?

Through my interview with a Bedford College alumna, I am hoping to discover the differences between women-only education and mixed education.  Thus, the main focus of my essay will be on how Bedford changed once she went co-ed in 1965. As Bedford College was the first institution of higher education for women in Britain, I want to explore the reasons behind going co-ed, how that affected her public image, and how it affected the students.  I also hope to subsequently learn about higher education for women in the 1960s, the job market, and home life after earning a degree.

From ‘Educating Women:  A Pictorial History of Bedford College University of London 1849 – 1985’ by Linna Bentley

The topic particularly interests me because in the US there is always a lot of discussion around historically all-female schools going co-ed.  Many of the all-female universities and colleges in the United States are extremely proud of their history and plan on staying single sex far into the future.  Therefore, it is very surprising to me that Bedford chose to go co-ed as early as 1965.

I also became really interested in Bedford College ever since I found out that she’s part of Royal Holloway’s legacy.  It really bothers me how she is often ignored and pushed to the back corner, when arguably she was the better school.  Everyone knows who Thomas Holloway is, he has a statue.  Elizabeth Jesser Reid?  Some poor looking residence halls.  I would personally like to learn more about Bedford from someone who attended the school and spread that knowledge to others.

I think that this is important in the wider context of public history because it is exploring an area that hasn’t really been explored within the public history sphere.  Bedford College has a really rich history and the majority of it is languishing in the Royal Holloway archives. There haven’t even been many books written on the subject.  I would thus like to bring to light her rich history and something that, I think, changed her image drastically. 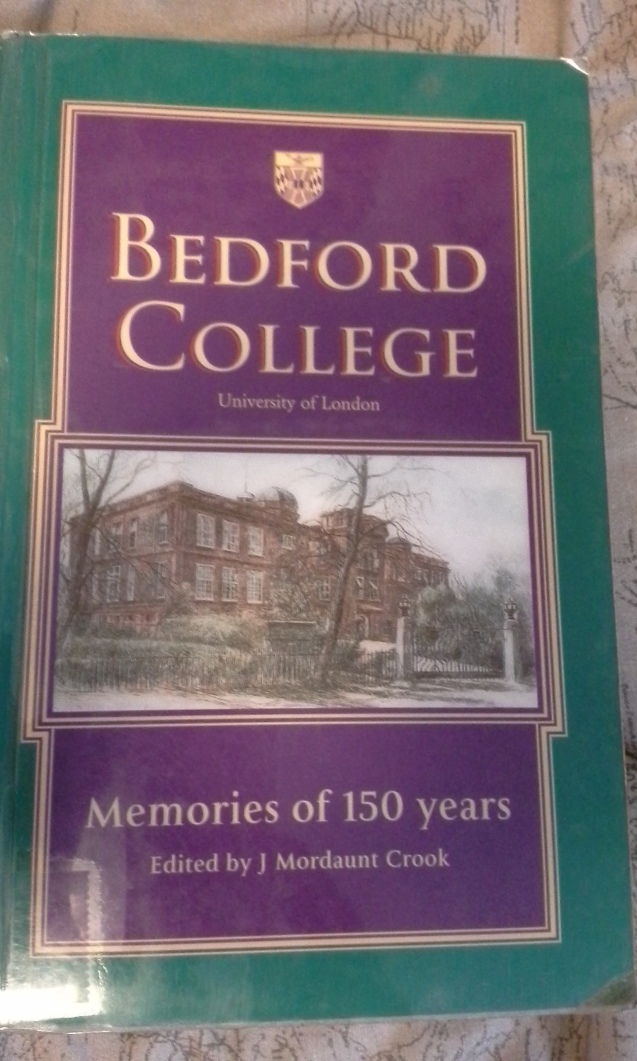 One of the few books published recently on the history of Bedford College.

A question that is often posed to me is, ‘But, what kind of history do you do?’  I used to not have an answer to that question, because I don’t have a specific area that I am particularly enthralled with.  However, when I got that question the other day, my friend piped up and answered if for me, ‘You do, like, history around here, right?  Like, local history.’  Finally, it was put into words.  Over the past few years every time I’ve gone to study in a new place, I immediately throw myself into learning about the history of that location and here in Egham it’s no different.  My Skills project last term was on life in Surrey in the Edwardian period based on postcards and the programme I am making for ‘The Public Communication’ is on the ‘hidden’ history of Royal Holloway.  I thus want to continue in this tradition and learn about why Royal Holloway College and Bedford College went co-ed in the 1960s.  I would like to explore the ‘death’ of women-only education in those two institutions and perhaps across Britain.

I come from a place that is known for its higher education institutions.  When I describe where I’m from, I’ll say Western Mass, you know, the Five College Area?  UMass Amherst, maybe?  UMass is usually the landmark people identify with, but of the other four schools of the ‘Five Colleges’, two of them are well-known female only institutions:  Mount Holyoke College and Smith College.  Both of these schools take great pride in being just for women (for undergrad, at least) and strive to stay that way.  Interestingly enough when I was applying to schools for my undergrad degree, three of the four schools I applied to where originally female only:  Endicott College, Lesley University, and Lasell College.  I chose to go to Lasell, where I learned that they didn’t go co-ed until the late 1990s.  Coming from that background, I am particularly interested in why Royal Holloway and Bedford went co-ed so early compared to schools in the United States.

I hope to interview Professor Caroline Barron, a former History professor of both Bedford College and Royal Holloway Bedford New College.  She also recommended that I get in touch with Dr John Prebble who was vice-principal of Bedford at the time of the merger of the two schools in 1985 and to look at the book Bedford College, University of London edited by J Mordaunt Crook.

The significance of this topic to public oral history will be that it will explore how the dynamic changed in higher education from just having females on campus to having both sexes.  Both Bedford and Royal Holloway were founded to provide women with an education equal to that of men, so why was it that they then let men join them?  As the topic is still within living memory and also coincides with the greater movement for women’s rights, I would like to understand how going co-ed changed the legacies of both schools.