The ‘Death’ of Women-Only Education: Will anyone talk to me? Will too many people want to talk to me?

Through research for my other Royal Holloway and Bedford New College themed project, I have learned that the women of Bedford College have a lot to say.  That being said, the alumni office has yet to return any of my emails, which makes me a little nervous, but also tells me to find a phone number.  Due to the fact that Bedford alumnae seem to be quite feisty, I think I’m going to narrow my research down to just focus on Bedford as there doesn’t seem to be many people who could speak on behalf of both schools.  I am further interested in Bedford because I feel she is not showcased enough at Royal Holloway and I would like to make her more well-known to today’s generation of students. 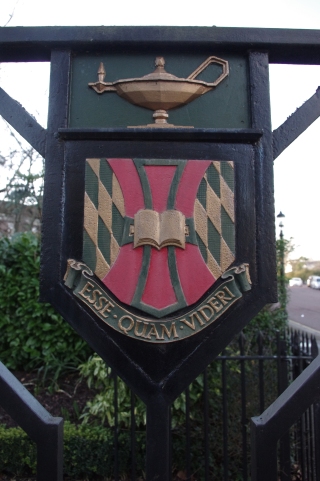 I would personally like the interview to tell me more about Bedford College:  the history, the student life, what it was like to be in Regent’s Park.  I also want to find out what it was like to go from being the first institution in Britain for the higher education of women to a co-educational college.  I want to understand how the dynamics of learning changed and why it was felt that it was necessary to go co-ed.  Furthermore, I want to create a bigger tie between Bedford College and myself.  When I entered Royal Holloway back in September I understood that I was going to Royal Holloway, University of London.  Now I couldn’t truthfully say that.

As the interview is hypothetically supposed to be for a ‘public history audience’, I would like it to increase others’ knowledge of Bedford and the idea of women’s only education being opened up to men.  I’m hoping the interview will provide a brief history on Bedford, how Bedford was different from Royal Holloway, and how Bedford changed when she went co-ed.

My biggest concern right now is that I won’t be able to find anyone to interview, or too many people will come forward and I will have to turn them away.  I would love to turn this into a bigger project, but as I have already submitted a proposal for my dissertation, I’m just not sure that that would be feasible.  I have been in contact with Professor Caroline Barron and she suggested I attend a Bedford College alumnae event on March 21 and just ask for interviewees, which is a possibility.

The Bedford Centre for the History of Women:  One way Bedford’s legacy is honoured.  Photo:  Alena Knaup.

Overall, I am not too anxious about my concerns and I am sure I will be able to find someone willing to speak with me.  All I need to do is put a little more effort into contacting the right people.

A question that is often posed to me is, ‘But, what kind of history do you do?’  I used to not have an answer to that question, because I don’t have a specific area that I am particularly enthralled with.  However, when I got that question the other day, my friend piped up and answered if for me, ‘You do, like, history around here, right?  Like, local history.’  Finally, it was put into words.  Over the past few years every time I’ve gone to study in a new place, I immediately throw myself into learning about the history of that location and here in Egham it’s no different.  My Skills project last term was on life in Surrey in the Edwardian period based on postcards and the programme I am making for ‘The Public Communication’ is on the ‘hidden’ history of Royal Holloway.  I thus want to continue in this tradition and learn about why Royal Holloway College and Bedford College went co-ed in the 1960s.  I would like to explore the ‘death’ of women-only education in those two institutions and perhaps across Britain.

I come from a place that is known for its higher education institutions.  When I describe where I’m from, I’ll say Western Mass, you know, the Five College Area?  UMass Amherst, maybe?  UMass is usually the landmark people identify with, but of the other four schools of the ‘Five Colleges’, two of them are well-known female only institutions:  Mount Holyoke College and Smith College.  Both of these schools take great pride in being just for women (for undergrad, at least) and strive to stay that way.  Interestingly enough when I was applying to schools for my undergrad degree, three of the four schools I applied to where originally female only:  Endicott College, Lesley University, and Lasell College.  I chose to go to Lasell, where I learned that they didn’t go co-ed until the late 1990s.  Coming from that background, I am particularly interested in why Royal Holloway and Bedford went co-ed so early compared to schools in the United States.

I hope to interview Professor Caroline Barron, a former History professor of both Bedford College and Royal Holloway Bedford New College.  She also recommended that I get in touch with Dr John Prebble who was vice-principal of Bedford at the time of the merger of the two schools in 1985 and to look at the book Bedford College, University of London edited by J Mordaunt Crook.

The significance of this topic to public oral history will be that it will explore how the dynamic changed in higher education from just having females on campus to having both sexes.  Both Bedford and Royal Holloway were founded to provide women with an education equal to that of men, so why was it that they then let men join them?  As the topic is still within living memory and also coincides with the greater movement for women’s rights, I would like to understand how going co-ed changed the legacies of both schools.